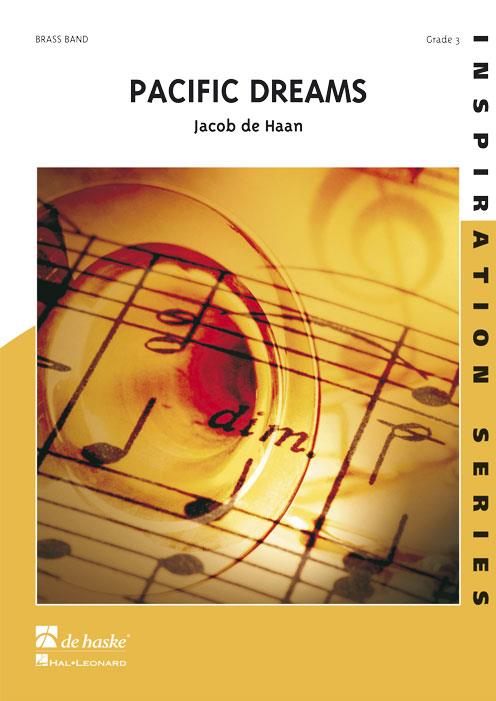 Pacific Dreams describes the experience of Miguel, a traveling composer from Spain who, feeling somewhat alienated from his homeland, is wandering through an area of Sydney known as The Rocks. At a small outdoor market in a typical street of this old colonial neighbourhood, he discovers a print of William DeShazo's painting "Pacific Dreams"

Portrayed in the painting is the surf of one of the exotic islands in the Pacific. Next, with the impressive Sydney Harbour Bridge looming over the narrow streets of The Rocks, he envisions sultry Pacific beaches. Suddenly a theme he once composed about the lakes in Japan comes to him. Is it the Asian influences present in cosmopolitan Sydney that bring this theme to mind? Or perhaps the waters around Sydney, over which he could sail to Tahiti? He is uncertain. Could this same theme be used to create a new composition about his feelings for the metropolis Sydney? How then to work his Pacific Dreams into the mix? Miguel is certainly no fan of Hawaiian music. Mayby he could use the vocabularies of islands like Hawaii and Tahiti, their beautiful vowel combinations being sung ad libitum by a mixed choir.

With these ideas and his newly purchased print of "Pacific Dreams", he boards the Metro at Circular Quay. He has a final glimpse of the harbour and the Sydney Opera House as the train races into the ground. On to the hotel! To work! He must compose!

Maestoso : Miguel is impressed as he gazes upon the Sydney Harbour Bridge. And yet, he wants to go away from this city. Away, to an exotic island in the Pacific.

Steady Rock : In the Rocks, musicians are playing at a square. Miguel basks in the atmosphere but at the same time he is fantasizing about Hawaii and Tahiti.

Andante Lamentoso : In his hotel room, Miguel is feeling sad and lonely in this big city. He takes comfort in his "Pacific Dreams".

Allegro : Miguel boards the boat that takes him from Darling Harbour to Circular Quay. In his mind he is traveling on to Hawaii. Or is it home, where the bolero is playing? He is pulled back to reality by the skyline of Sydney.

It Had Better Be Tonight (Brassband)